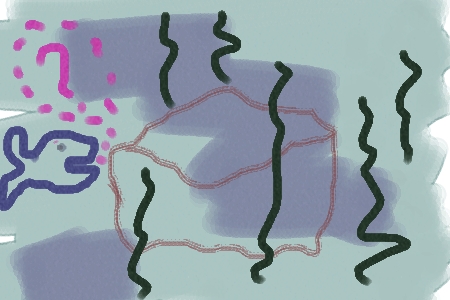 Poochie’s daddy. Georgie’s mummy. Three members of the family-run hardware store. An executive director. The crossing guard. The co-op office manager. The health food store owner. The dollar store owner. My barber. Niall’s mum. My mum. The neighbours three flights up. I knocked on doors, I bought light bulbs and organic chocolate bars, I stopped acquaintances in the street. Because it’s raining today, the dogs aren’t out for more than a moment, so a number of dog parents that I’d been counting on didn’t show up. A few other possible contest judges weren’t around either, for one reason or another.

Nevertheless, everyone I did manage to catch — twenty people in all — were good sports. Some chuckled at the idea, some asked if I wanted a donation, some told me turtle tales of their own. One dogparent remembered a snapping turtle the size of a footstool that lived under the cottage dock when he was a kid. One of the hardware store owners said that his childhood chums would take a small painted turtle from the Riverdale pond, care for it for a year, and return it the next summer. Someone said that in Indonesia, people pat a carved wooden turtle to leave their worries outside with it before entering a home.

Many people had automatic favourites when they viewed the ballot sheet. “It’s gotta be ‘Tiny Tim’!” “It has to be ‘Seamus’!” Often they said why they chose a name.  “‘Spike’ will give it some protection.” “I think ‘Shelley’ is a sweet name.” “‘Myrtle the turtle’ rings a bell somehow.” “Ha, ‘Sandy’ like a beach!” “I like ‘Micmac’; do you know the aboriginal legend that the world was built on a turtle’s back?”

Seven entries; twenty judges; not a single entry that wasn’t chosen by someone. At first, in fact, with each ballot a different name was chosen, and I wondered if I would end up with three votes for each name. Finally, however, there emerged a winner:

It’s a boy! His name is Seamus.

Please let me know, Livingisdetail, what topic you would like me to write about. I owe you 500 words.

For everyone else, I’m willing to award a second-place prize: give me a word, e.g. “Checkers”, and I’ll compose a limerick for you. I think everyone deserves a prize for participating. Thank you all! It was a lot of fun.

This entry was posted on Monday, March 31st, 2008 at 13:36 and is filed under games n contests, Naturalism. You can follow any responses to this entry through the RSS 2.0 feed. You can leave a response, or trackback from your own site.

7 Responses to The Envelope, please! (this morning’s entry cont’d)