HAVE YOU SEEN THIS TURTLE? 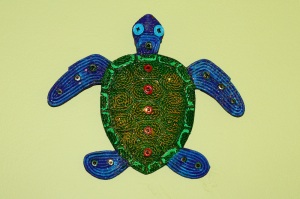 My photo doesn’t do justice to her details and glitter.

We went out today — E.g., Jack, Jack’s mum, Cai, and I. We left at 9 00 and returned just before suppertime. When E.g. and I got to our apartment, we found a zippered burlap bag, originally made to hold 10 pounds of basmati rice, hanging on the doorknob. Eh? Unzip, pull out a crumpled grocery store flyer. Unfold, find the prettiest little purple-and-green sea turtle. I’m pretty sure it’s resin-cast, but it’s very well done, made to look like string carefully glued over a wooden base, and it’s hand-painted and sprinkled with glitter. On its underside is a little picture hook to hang it on a wall. It’s just the same size as Seamus, the WWF sea-turtle stuffy.

There was no note. Who could have left it? E.g. guessed that Robert had come across it on his travels, but he doesn’t read my blog. It obviously wasn’t Jack and his mum, because we had picked them up and dropped them off today. What a delicious little mystery!

Our car lives in the underground parking garage. One of the things we had done today was get groceries, so we were coming up to get the bundle buggy when we found the anonymous gift. On my way back out with the buggy, I saw Coco, the German Shepherd, with her daddy Michael. Hmmm.

Michael and John were two of the judges for the Name-and-genderize-the-baby-sea-turtle contest. They don’t even own a computer, but they’re very fond of us; the other day they had given us a stained-glass rainbow flag. Their nextdoor neighbour is moving out, and they’ve acquired a few pretties from her. Maybe…

I think Michael must have seen me getting the groceries, because I was no sooner inside when the phone rang. It was John, asking if I’d found little Seamus.

“I thought it must be you guys! She’s beautiful! And her name isn’t Seamus; I think it’s Isabella.”

“Bella,” John mused, “that’s a good name.” It was then that I remembered that one of his nicknames for Coco is “Bella.”