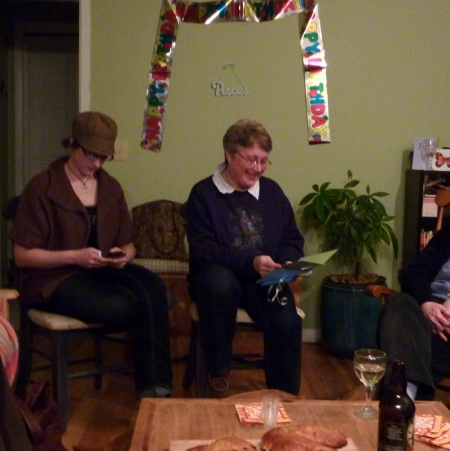 Staff finds information for another guest while E.g. opens a card.

Last night we hosted a party.

E.g. turned 50 this week, so we held a women-only potluck, what I call a hen party. Eight guests came. One was our next-door neighbour, Staff. One was Gilda, who has been E.g.’s friend for nearly 30 years. One was a woman we met at the Shrove Tuesday pancake supper two weeks ago.  I had met four of the guests less than twice.

As an introvert, I wasn’t sure how I felt about this whole thing. Turns out that most of the guests, too, self-identify as introverts. And the party was an incredible success, with connections happening all evening:

“Really? What years did you attend Acadia?”

“Oh, I know your boyfriend! He used to play with my husband’s band.”

I’m unaware of what exchange was made concerning the fact that two women brought exactly the same broccoli salad. Talk about a group of people who were destined to come together!

A daughter of the Muses.

Such beautiful women in our living room last night. Such interesting, interested, thinkers and makers and doers. Crafters, writers, teachers, musicians, gardeners, animal lovers, techies. Courageous. Authentic. Helpful. Underemployed. Still alive despite whatever personal troubles each might have endured in the course of her life.

The party began with a “tasting”. I brought from the cellar two bottles of homemade hooch — peach-banana wine and hard apple cider — and E.g. handed round some disposable shot glasses and a permanent marker so that each guest could initial her glass. I think most people opted for store-boughten after that, but at least they had had the fun of trying something different (and had avoided the embarrassment of a full glass of swill). 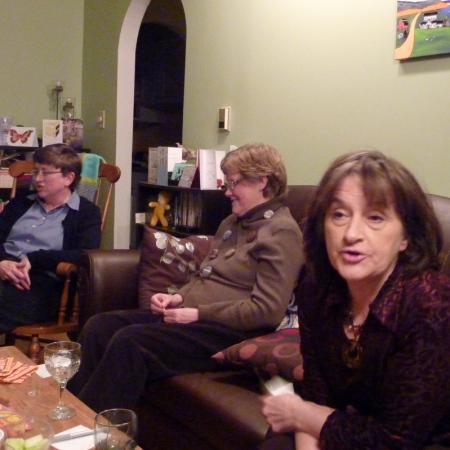 The room was like a stand of willows in a summer breeze, as conversations shifted from side-by-side to straight-across to kitty-corner. Sometimes one speaker had everyone’s attention, the most notable example of this being the round of tales concerning car problems and the kindness of strangers. Awe-inspiring, hilarious, touching — each person’s tale was different.

The food? Fabulous. It was all there — appetizers, side dishes, meats, breads, desserts, and loads of broccoli salad — without any prior conferring.

And as if a balanced meal, instant friendships, and incredibly cute Cardigan Corgis weren’t enough, there was the Perigee Moon. We turned out the lights and watched it rise swiftly over a rooftop.

She scrapbooked a beautiful card for E.g. .

The party couldn’t have been more perfect.

It began at 6 pm, and the last guest left at eleven. E.g. and I took our time loading the dishwasher and putting away the leftovers, finally hitting the sack at midnight.

Then E.g. awoke before 05 00, threw on her winter coat over her jammies, slipped into her rubber boots, and went out to photograph the moon. Happy birthday, you crazy woman, you. 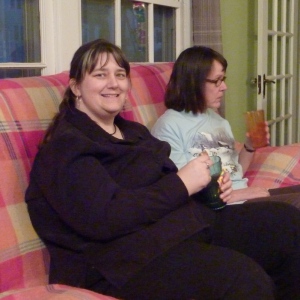 This entry was posted on Sunday, March 20th, 2011 at 23:39 and is filed under Friends, Klatsch. You can follow any responses to this entry through the RSS 2.0 feed. You can leave a response, or trackback from your own site.